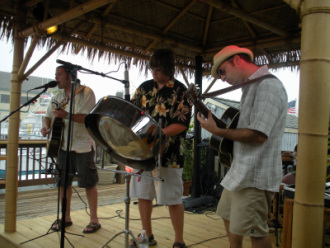 Lead Steel Pan player Bill Bittmann has been performing professionally on the east coast
since 2004 with the Tradewinds and later, the Caribbean Duo Junokats while attaining a
B.M. in Music Performance at the Chicago College of Performing Arts. Bill also holds a
Masters degree in music performance from the University of Georgia where he instructed
the U.G.A. Pan Pups Steel Orchestra. Along with performing with the Tropical Breeze steel combo and U.G.A. Pan Dawgs Steel Orchestra, he was invited to perform in Trinidad and Tobago
in 2008 with The RBTT Redemption Sound Setters in the national Panorama finals. Bill
has recorded for Naxos as principal percussionist of the U.G.A. wind ensemble and also
with indie rock band Summer Hymns on an upcoming release. He performs on a Panyard
Steel Pan, QSC Pro Audio Speakers and Sennheiser Microphones


Vocalist and Rhythm Guitarist Bill Caterini has been performing in the area for over 15 years and has a vast library of songs at his disposal from irish shanties to classic rock to contemporary hits. He holds a music degree from Monmouth University and operates Cat. House Sound, LLC/ Mako Recording studios in Wildwood, NJ, where he is also a studio musician and audio engineer/producer.  He is a member of both The Audio Engineering Society, and the National Academy of Recording Arts and Sciences (NARAS - The Recording Academy). Bill performs on Gibson Guitars, Yamaha and Mackie Pro Audio Speakers, and sings with Shure Beta 58 microphones.